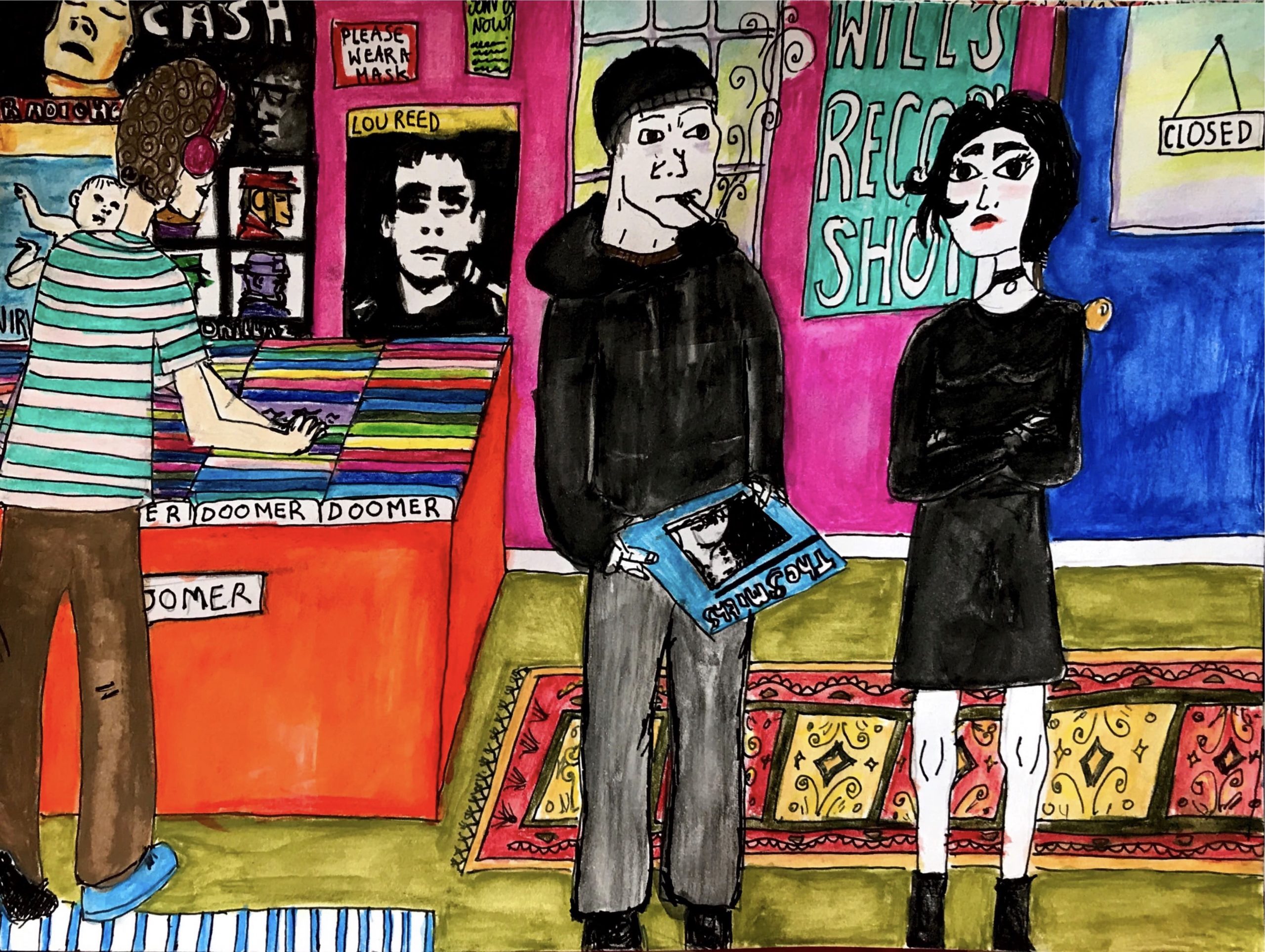 The Doomer Playlist is a musical phenomenon that has taken place since 2019. Individuals who are interested in the Doomer character (see: The Doomer: The Meme of a Generation) have assembled collections of songs that fit the dreary and depressing tone of this meme. These have become so prolific over the past year, that some have suggested that – Doomer – has now become a distinctive musical sub-culture.

‘It’s just a mixtape though isn’t it? What’s the big deal?’

Well, it certainly is ‘just a mixtape’. However, it’s much more than this for many people. Unlike most playlists, which are simply an assortment of our favourite songs or a themed compilation, the Doomer Playlist manages to embody a lifestyle. The dark, sombre, funeral march beats and solemn voices which it comprises of are ultimately a reflection of the Doomer life. They become a soundtrack, an underlying score, to the monotonous routines and impending (or current) existential crisis that they face.

While all Doomer playlists are different, they all maintain this gloomy motif. Throughout many of the lists composed, trends can be demonstrated as to which artists are commonly featured. On June 10th, 2019, Lie Likes Music examined ten different Doomer playlists to establish the most frequently used artists within this genre. While his analysis cannot be considered definitive, from listening to dozens-of-hours’ worth of these mixtapes I can indeed attest to its findings, in which The Smiths, Radiohead, The Cure and Slowdive all featured within the top four most regularly used bands.

However, English-speaking bands/songs are not the only ones to be featured within this opus. Instead, many musical talents from Russia have become interesting staples. The popularity of these tracks has led to the creation of an entire sub-genre – The Russian Doomer Playlist. Bands such as Molchat Doma (Молчат Дома), who have recently received even more attention through Sudno’s (Судно) proliferation on TikTok; Kino (Кино́), whom are often considered one of, if not the most, influential Soviet band in history; and those as current as Ploho are often featured. If you thought the original Doomer playlist was dark – wait until you listen to these. They exhibit an even greater brooding attitude and manage to create a soundscape that evokes the brutal cold and harshness of the Russian landscape.

What is important to recognize is that the Doomer playlist is not limited to a set of bands or nationalities. Doomer is a universal language. You can be Australian Doomer – A Japanese Doomer – it doesn’t matter. What is important is the attitude of the individual and sound of the song.

So, what makes a song Doomer?

Well, to put it simply – it can’t stand out. Like the Doomer, it should fade into the background. This doesn’t mean the song should be an uninteresting one, it just has to be toned down enough that it can act as backdrop. While there aren’t any set rules, the vocal will likely be a lower pitch and flow with the thudding, depressive beat of the music. The lyrics will often match this inflection and offer an introspective commentary on the pointlessness and burdensome nature of life. However, to be included within a Doomer Playlist, a song does not have to include all these features – the decision to incorporate a song will usually depend on the emotional or gut reaction of the creator. This has led to a wide array of bands, songs, and genres to be included within this sub-culture.

While the artists featured on Doomer playlists range from a wide variety of genres and time periods, it is quite evident that the majority of them were either popular or producing music during the late-eighties through to the early-two-thousands. This is of course of no great surprise if one is to consider the typical age of a Doomer. As this memetic figure acts as a representation of the Millennial Generation (born between 1981-1996) much of the music featured, exemplifies the tastes and trends of these eras.

It will be interesting to see if or where this trend develops – what’s next for the Doomer genre? Is there any room left for creativity or has everything already been said? Only time will tell. However, these compilations have already achieved a spot in our current cultural history, in which those who didn’t have the motivation to create their own sound, at least managed to tell everyone what it would be like.

‘Men With Tits’: The Struggle Of Writing Strong Feminine Characters

‘A Plague of Cities’: How & Why Have Towns Been Overlooked?

In recent years a divide has arisen between cities and towns. As we begin to notice this divide, will we begin to change the way we invest in our infrastructure and the way we live?
Read more

The Good Captain's Men is the fourth chapter in The Lost Prince Saga, which explores the age of the reign of King Tamburlaine III.
Read more

To be updated with all our latest news, cotent and job opportunities.

Mouthing Off is a Magazine created by and for students. We want to provide you with the best content young people have to offer, from articles, documentaries, interviews, stories, poetry, and stunning artwork.